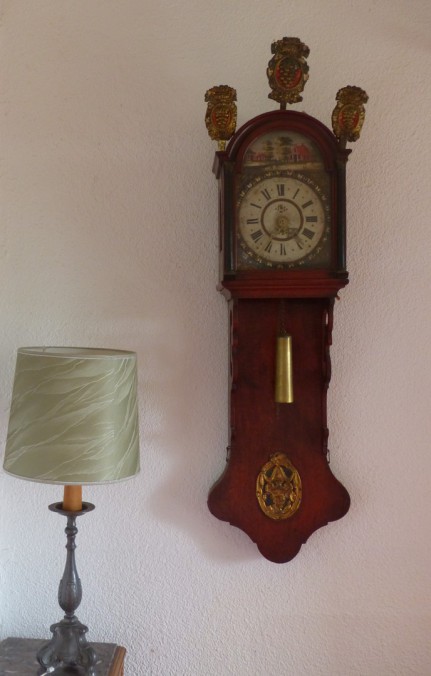 Frisian clocks are a household name in the Netherlands.

Since the 18th century, hang out in the Netherlands Frisian clocks in the form of the Frisian tail clock.

The Frisian clock was manufactured from 1770 until about 1890.

Typical of the Frisian clock are i.a. the painted dial plates, often with images of the four seasons in the corners.

Top left is Flora as goddess of spring, top right the pointers is the summer represented by Ceres, then right under Pomona or Bacchus for fall, and left under Vesta with the fire for winter.

The later Frisian tail clocks often have ornaments of latoen on the dial plate, and even later are the dials even whole of pressed brass as with the French comtoise clocks. 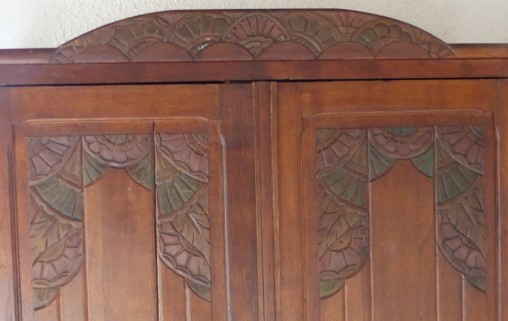 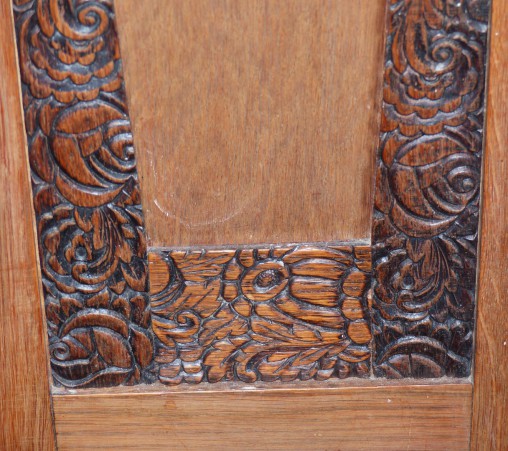 Art Nouveau offers a synthesis of all arts and banishes the distinction between arts with capital A and small a.
Within the Art Nouveau are rehabilitated arts creations previously reserved for only the so-called “noble” arts.

The emphasis is put on "release", asymmetry and dynamic game.
All forms are in every detail involved in the decoration.

The decorative patterns may show an abstract linear trend.
However, they are more often of figurative nature.
They are rooted in nature, and are responsible for a symbolic content.

The colors are soft and delicate. Pastel shades of blue, green, grey, pink, purple, and beige are used, particularly in bricks and ceramics.

The used materials are glass, metal, stone and brick, as well as wood.

The wood used for making furniture is multiple, gold-plated or solid mahogany, oak, walnut, pear, ebony and sycamore (for marquetry). Emile Gallé, Louis majorelle and Eugène Gaillard are the most representative. 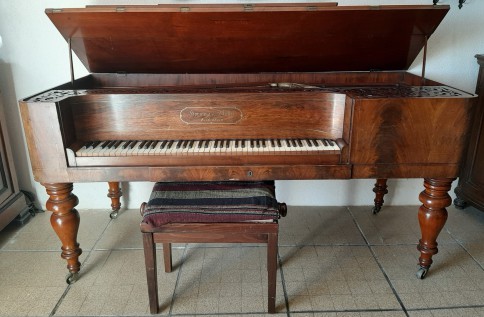 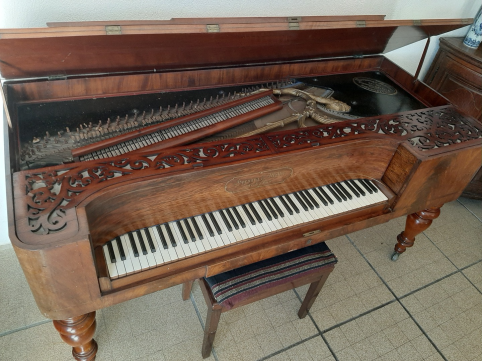 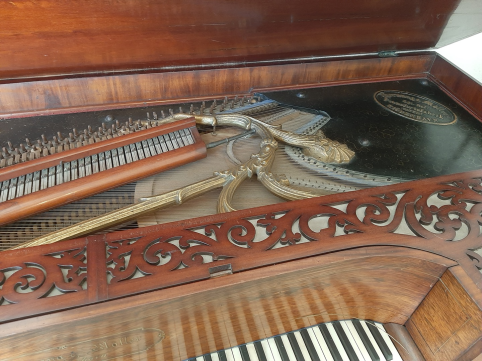 The instrument pianoforte at Villa Eglantine was made by Hornung & Möller and is an important and rare specimen of a Danish piano. It has an ornately decorated cast iron frame, highlighted by gorgeous gold barring inside. The instrument was totally restaured and is in an extraordinarily condition.

Conrad Christian Hornung trained piano making end of the years 1700 in Germany. He returned in 1800 do Denmark to open his own piano workshop. By 1843 C.C.Hornung had been appointed purveyor to the Danish royal house.

Some years later, Hornung passed the instrumentmaking workshop into the hands of Frederik Möller, who continued to work under the name of Hornung & Möller.

The company produced pianos until its closure in 1972. Hornung & Möller pianos are renowned for their gorgeous appearance and bbeautiful sound.

The modern piano as the upright piano and grand piano has evolved from the pianoforte, the instrument on which, for example, Mozart composed all of his piano music.

Pianoforte in Italian means literally soft (and) strong. Because the force with which a hammer of the mechanics touches the strings depends on the mode of playing, each individual tone can be played both loud and soft (and the nuances in between). This lacked the precursors of the pianoforte, including for example the harpsichord.

Later the name was further shortened to piano.

The upright piano is built up vertical, and the piano with the strings horizontally is called a grand piano.

The pianoforte was invented between 1698 an 1709 by Bartolomeo Cristofori  in Florence.

Silbermann was one of the first German piano builders, and Johann Sebastian Bach being aware of these instruments, played them during the last part of his live.

The renewal of the harpsichord to pianoforte was huge. A new type of instrument was developed, which had a completely different sound.

The cast iron frame and cross-stringed system were first applied. This permitted increased tension on the strings in comparison with the wooden frames from before, resulting in more powerful fortes and better tune ability.

In the 18th and 19th centuries, the pianoforte became an increasingly popular object and the instrument boomed among the well prosperous middle classes. On a pianoforte one could play arrangements of symphonies, or saloon pieces, and it was a source of civic entertainment.

Piano lessons became for many part of music education. This is also the period in which a very substantial portion of the piano literature has been written.

Regular tuning is a point of attention.

Fluctuations in temperature and humidity as well as playing ensure detuning of the instrument. The more and louder - after all, there is exerted more force on the strings - is played on a piano, the faster of intune the instrument. The instrument is tuned by bringing the display back onto the correct mutually corresponding heights.

Tuning a piano is a skill that usually the player cannot do himself.

Instrument museums or private owners of a pianoforte appeal to some of the still existing specially trained piano tuners able to tune a pianoforte (and perform other minor repairs caused by wear).

The tuning is done by twisting the tuning pins, so that the tension and hence a change in the hight of the tone appears.

The quality of a pianoforte is determined by a number of factors :

- the scale lengths of the instrument,

- the density and structure of the soundboard,

- the tension within the soundboard,

- the resonance receptivity of the soundboard,

- the way of playing the instrument.

Preserving the quality depends on :

- the extent to which there is played on,

- the quality of maintenance,

- the constancy of environmental factors such as temperature and humidity of the room. 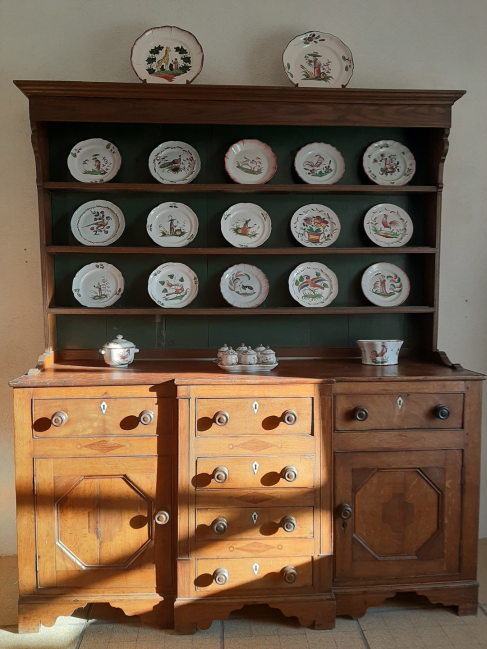 Mahogany panels on cabinets and drawers.

Rococo in all her charms 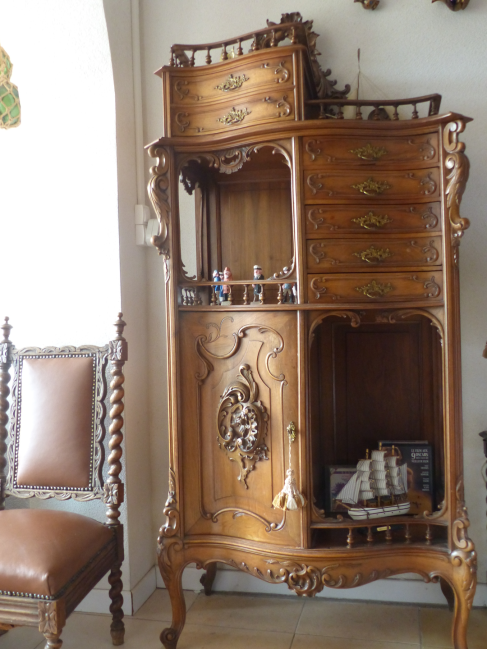 Styles of furniture from the 1800s differ greatly.

The art furniture that dominated the last half of the 19th century was in Victorian style such as Gothic Revival and Rococo Revival.

Typical ot the Rococo style are the deeply into the piece of furniture carved motifs, as well as the curled legs with a curve outwardly and then inwardly in a reverse shape of the "S".

The late 19th century furniture closed in contrast with a style of arts and crafts which responded with extreme simplicity to the Victorian excess.

Typically is the use of brass and bronze, such as, inter alia, on the drawers.